Taylor Sheridan’s on a bit of a roll here, isn’t he? The writer of Sicario and Hell Or High Water returns with Wind River, this time as writer-director, which sees the ensuing investigation after a young, Native American girl is raped and murdered on a Wyoming Native American reservation.

It’s very, very difficult to talk about this film without spoiling it, so I’m going to talk about the pros and cons that don’t spoil the film, then include some nice photos of the actors, below which will be a spoiler-filled discussion. It goes without saying but I’d better be clear: don’t read beyond the photos if you’ve not seen the film, or if you plan on seeing the film.

The film is superb. There’s no point trying to be nuanced about this. It’s straight up brilliant. In pretty much everything it does.

Elizabeth Olsen excels as Jane Banner, the FBI agent who is assigned to the case. There’s a whole lot in this film about treatment of Native Americans, but including a perfectly nice, efficient, good-at-her-job white woman who is just a bit insensitive, provides a perspective that otherwise wouldn’t be seen. Her meeting with the parents of Natalie, the victim, is very uncomfortable, and Banner’s brashness provides the opportunity for lines like “why, when you people try to help, does it always start with insults?” It would have been very easy for Olsen to play a woke, benevolent white saviour, perfect in every way. She isn’t, and the film is better for it.

Don’t be surprised if you seen Olsen in more roles like this: she’s great as Scarlet Witch in the Avengers films, but she absolutely nails the sympathetic, cool, but slightly flawed character.

I was thrilled to see so many Native American actors, too. More often than not, non-white roles are overlooked in Hollywood movies, and both lead and background roles are given to white people where possible, whether consciously or not. Not here: Graeme Green is superb and provides some necessary light entertainment as the local police chief, and Gil Birmingham (you know, the go to Native American actor) is superb as Natalie’s father. 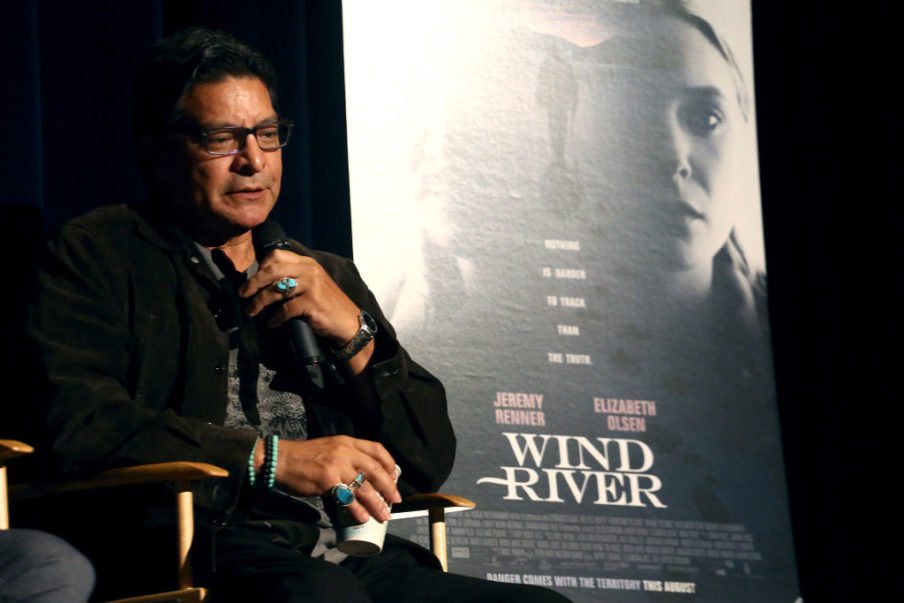 The only flaw with the above paragraph, and with the film as a whole, is the casting of Jeremy Renner. While Renner is brilliant as local hunter, Cory Lambert, who is brought onto the investigation as an expert of the hazardous, blizzardous surroundings, I can’t help but feel his casting slightly un-does the excellent work of the other casting. A local, married to a Native American woman, with a Native American son, who is an expert in the local surroundings and whose knowledge of said surroundings is hugely important to the plot of the film, I find it pretty hard to fathom why Cory Lambert is white. It makes so little sense, when you look at it on paper. It doesn’t damage the film as such, and I’m sure many people won’t have an issue with it at all, but it bugged me.

One of the hugely impressive elements of the film was its reluctance to become a whodunnit. There wasn’t a lot of mystery here: once you learned it was the rig workers, that was that, really. There were a few nice touches, such as one of the local policemen noticing bite-marks on one of Natalie’s assailants before we knew it was them. But once it became clear it was either Natalie’s boyfriend, one, or many of his coworkers, who attacked Natalie, we had a perfectly executed explanatory scene. The lack of mystery also allowed writer-director, Sheridan, to explore certain themes, grief and treatment of Native Americans being two that really stood out for me.

Rape scenes are horrible, I hate them. But they are bearable, and often a necessary evil, if done well. And hats off to Taylor Sheridan, he’s written and directed this one very well. Firstly, it doesn’t linger too long. There’s enough lingering to make me feel thoroughly sick (and, in all honesty, start crying), but not too much that it feels like the director is enjoying it, that they are proud of it. Secondly, there is absolutely no doubt that the people committing the crime are absolutely evil. They are disgusting, horrible, deplorable pigs and they die bloody deaths in which the audience can revel. Of course, it doesn’t make up for the rape and ultimate death of Natalie, but the demise of the assailants is something the audience deserves after witnessing the rape itself.

But there is no finer reward than watching Pete (the initiator of events) effectively suffer the same death as Natalie, as Jeremy Renner watches on. Forcing a confession out of him, Lambert lets Pete go, allowing him the same opportunity as Natalie had after escaping her attackers (while they beat her poor boyfriend to death). Pete is allowed to run barefoot through the snow to find a main road, but barely makes it one hundred feet before collapsing. Natalie made it six miles. A huge effort is made to make sure Natalie is a hero here, someone who did absolutely nothing wrong. There’s no pathetic, unnecessary devil’s advocacy, where Pete gets a chance to give his side of the story. There’s one side: he’s a dick, and he got what he deserved.

Another thing I loved about the ending was the text that appears before the credits roll. In informing the audience about crime statistics surrounding Native American women – notably that literally nobody knows how many are missing – the film comes full circle, reiterating the film’s central and most important theme, the treatment of Native Americans, women specifically.

Ultimately, it took me a solid twenty-four hours, and watching Bake Off directly afterwards, to get over Wind River. I was genuinely shaken and couldn’t stop thinking about it. But having collected my thoughts, it’s honestly one of the best films I’ve seen this year.